The Declaration on Women’s Sex-based Rights was launched on Sunday, August 2nd to the Spanish-speaking world. This was the first Women’s Human Rights Campaign (WHRC)’s webinar in Spanish, with over 500 women from Latin America and Spain in attendance. 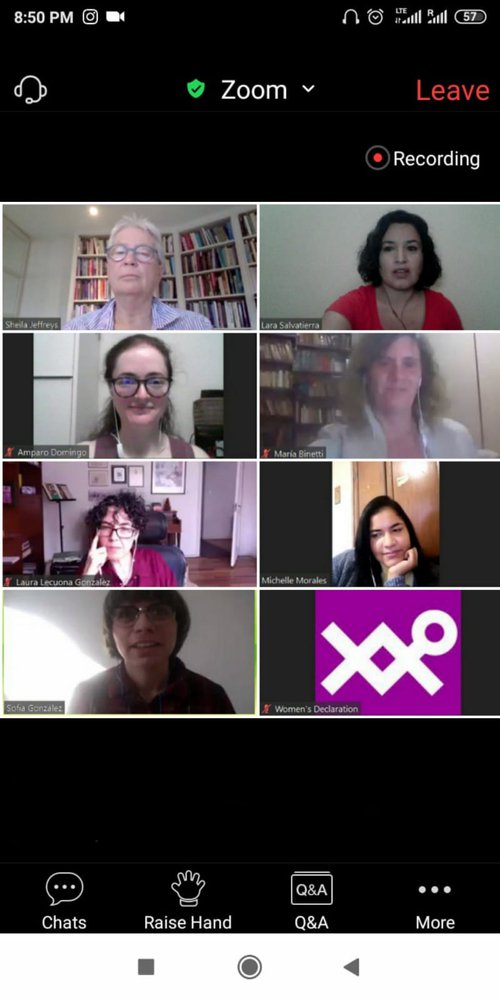 Sheila Jeffreys opened the meeting by introducing the main purpose of the Declaration, which is to remind women what our rights from UN conventions are, and to show how transgender politics threaten them. She pointed out the capturing of national and international policies by the transgender lobby, queer theory and politics. However, despite this immediate threat, she was optimistic about the future. The phrase ‘women’s sex-based rights’ is being taken up by many organizations and speakers, and the Declaration is being used by feminist activists as a lobbying tool. Thoughtful and brave feminists of all ages, and from 5 continents, are being put in touch with one another to create networks of community and activism, and a new international wave of the Women’s Liberation Movement.

Amparo Domingo referred to the negative impact gender-based statistics would have if “self-ID” were introduced in Spanish law, since males who identify as women would not be included in the figures of male violence, rendering it unaccountable. Their female victims would also remain invisible and would not have any of the support current legislation offers to women who experience male violence.

Michelle Morales talked about the importance of medical research, diagnosis and treatment that takes into account sex differences; of abandoning the male body as the blueprint in medicine, and of making visible the specific material reality of women. She also described some of the serious health consequences of cross-sex hormones and “sex re-assignment” surgeries.

Laura Lecuona addressed the history of the “gender identity” category, an ideological construct of the non-binding Yogyakarta Principles, which are being adopted uncritically by governments to the detriment of binding legislation on women and minorities. She also mentioned how even women who call themselves feminists are jumping on this gender identity bandwagon without considering the consequences.

Lara Salvatierra spoke about the forced sterilizations of women in Peru during the Alberto Fujimori dictatorship (1990-2000) and the continuous postponement of women's rights in her country until today.

Sofía González explained that “woman” is not a legal category in the Chilean Constitution, therefore sex-based rights do not exist on paper. She also described some well-known cases of violence against women and how the Chilean justice system continues to fail them.

Lastly, María Binetti presented the Argentinian Campaign for the Recognition of Women’s Sex-based Rights, a local initiative adhered to WHRC. She explained that Argentina was the first country to pass a Gender Identity Act in 2012, which legally recognizes a person’s “inner felt” sex without any requirements, including age. In fact, there are currently many children below 6 years old who have already had their official documents changed. The Act was promptly approved, avoiding a public and informed debate about the negative impact it would have on women’s rights. She also talked about the way in which the new legal pattern based on self-perception is influencing politics and culture in general. For example, political correctness and even some current bills that have replaced the constitutional category of “woman” for the gender-neutral category “person,” as well as “human milk” instead of “breast milk.” Lastly, she asserted that human rights are the rights of each and every individual, regardless of self-identification, accounting for the material, objective and social reality of the human race. Binetti concluded that the Argentinian people deserve a serious debate on this issue.