Get connected in Germany

Read the statement by WDI Global on our use of language.

You can register here for the next German speaking webinare hosted by WDI Germany. 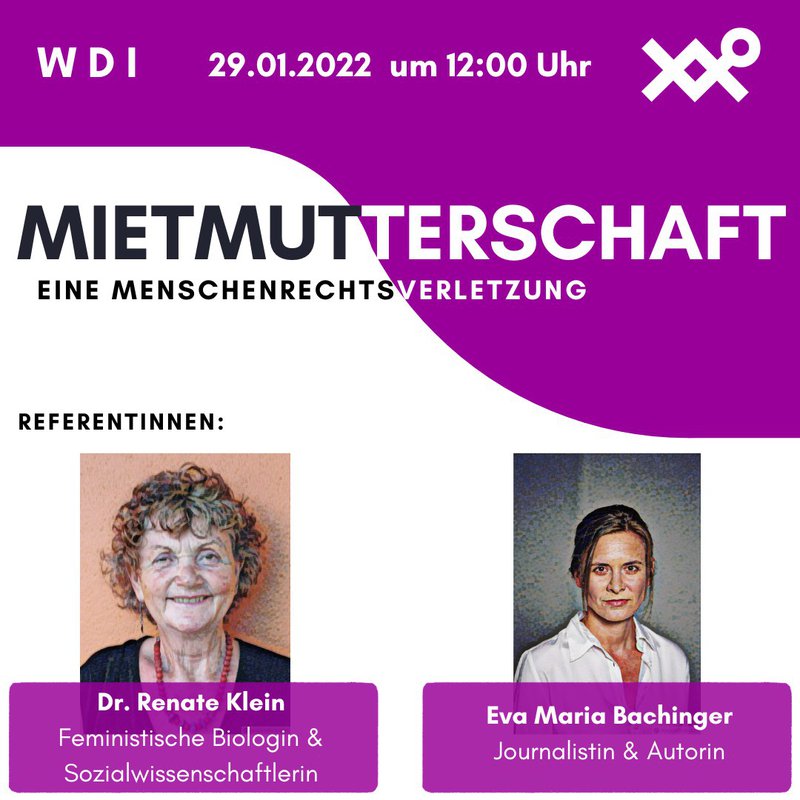 The independent working group for women's sex-based rights "Arbeitskreis Geschlechtsbasierte Rechte der Frau" has designed a postcard against Self-ID in Germany and calls out to print and spread it widely. The PDF already contains a bleed and a safety margin of 3 mm in all directions as an allowance to the DIN A6 format. You can download the postcard here. 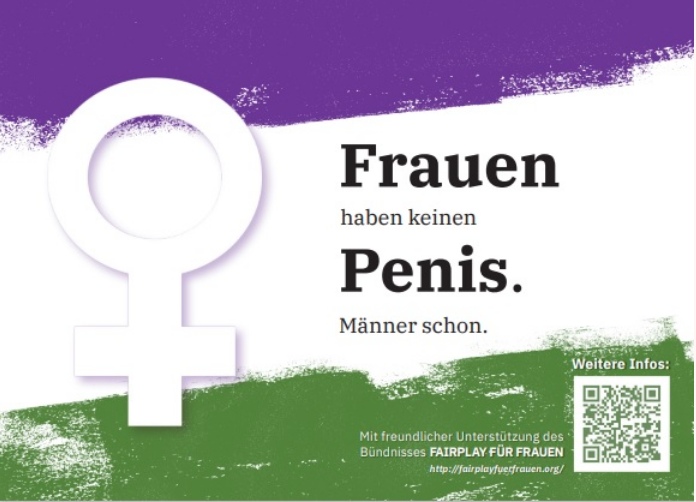 The new initiative "Geschlecht zählt" [Sex matters] has filed an election objection because Green Party politician Markus Ganserer received a Bundestag mandate as a man on a women's list position.

LGB Alliance Germany, signatory of the Women's Declaration, has written a statement on the coalition agreement of SPD, Greens and FDP.

Due to the current tightening of the measures related to the state of emergency in Baden-Württemberg, we have decided to postpone the rally announced for 27/11/21. We will announce a new date in due time.

On Saturday 25 September WHRC Germany held a protest highlighting the dangers of gender ideology. More actions are planned for Berlin and Stuttgart in the coming months. 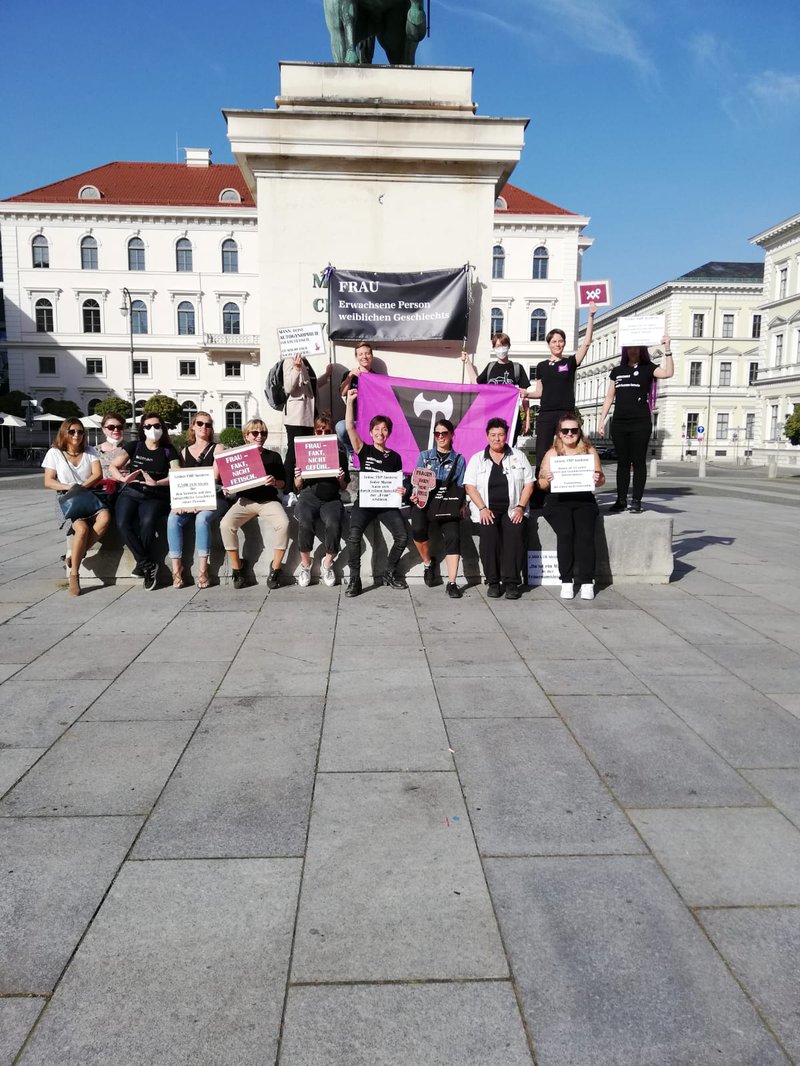 One day before the federal election, WDI Germany is organizing a rally for women's sex-based rights and against laws for "self-identification" of sex. It takes place at 2 p.m. on Saturday, 25.09.21 at Wittelsbacher Platz in Munich. We will clarify that a legal expansion around the concept of a "gender identity" is not compatible with the protection of women's rights and the integrity of minors. In particular, this refers to proposals from the election programs of the Green Party, SPD, FDP and DIE LINKE for a "self-determination law". Such a law would allow any person to be legally the opposite sex in a simple way. The consequences of such "gender identity" laws for the physical integrity of women and girls, for freedom of expression, for our language, for women's and girls' freedom of assembly, in sports and everywhere in daily life will be highlighted.

17 September 2021 - You can see the answers to our election test questions here. Similar questions are answered here (including SPD).

20 May, 2021 - We are very pleased with the outcome of the parliamentary vote on May 19, 2021, in which the draft legislation for a German Self-ID law was rejected. This sent an important signal, also for women in other countries on which such decisions have a spillover effect. Our politicians are beginning to know that women's sex-based rights and the integrity of children are being massively violated with "gender identity" laws. You can see the parliamentary debate and the result of the vote here.

15 May, 2021 - Sign and share our petition against a "self determination" act [self id] in Germany. You find an English translation here. Print the petition text here and collect signatures on paper to upload to the site. Print and stick these sheets everywhere you can. 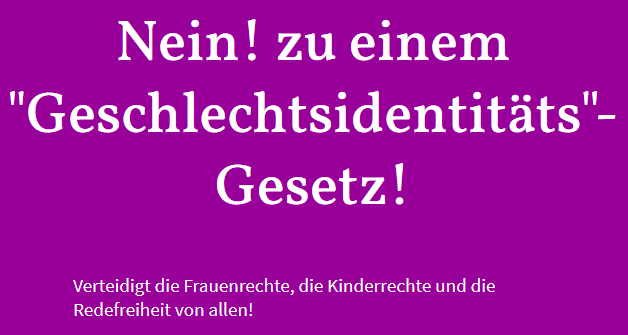 See also: What can we do?

On May 19, 2021, there will be the 2nd and 3rd reading in the Bundestag on the bills of the FDP and Bündnis 90/Die Grünen on a self-declaration of the biological category gender ("self-determination law"). You can find the draft bills here. You can follow the debate live here. There will likely be a vote, with MPs rejecting the drafts in the best case scenario. The debate will begin at 6:40 p.m.

Both drafts violate almost all articles of the "Declaration on the Women's sex-based rights". Our detailed statement of 10/13/20 on the drafts can be found here. Also the Lesbian Action Center (LAZ reloaded) had published a statement. In this video for WDI Germany (excerpt 12:44 min), Dr. Inge Kleine summarized the main points of the draft laws and further criticisms of them.

Please take action now! Write to the members of parliament in your constituency, even if they are not in the party you vote for. Some committed women have created a sample letter for this, which you can download on this blog. Another activist has written these sample letters that you can use.

On this blog there is a simple guide on how to formulate a letter to MPs and argumentation help against the law planned by FDP and Greens. The email addresses of your members of the Bundestag always consist of [email protected] Here you can find out which MPs are responsible for your constituency.

On May 15 and 18, there will also be an information event by "Fairplay für Frauen" with speakers Eva Engelken and Dr. Antje Galuschka. Both are co-signers of the Women's Declaration. Learn more about the event here.

On May 18, feminists are planning a protest action against the proposed law in Berlin. They welcome support from more women and men supporting them. Get in touch about this at [email protected]

On May 17, LGB Alliance Germany, signatory of the Women's Declaration, is planning an online demonstration on Twitter. Find more about it here.

3 May - WDI issues statement in support of Lesbenfrühlingstreffen

WDI condemns the appalling and unfounded attacks on the Lesbenfrühlingstreffen (Lesbian Spring Gathering) due to take place 21-23 May in Bremen. Lesbenfrühlingstreffen is a traditional annual lesbian conference, presenting a huge variety of events – nearly 70 - including speeches, workshops, panel discussions, art exhibitions, music performances and more.

We stand in solidarity with Lesbenfrühlingstreffen and are deeply disappointed that those leading these attacks include not only private trans activist groups but also “queer feminists” and even federal foundations. This lesbian festival, which has run almost every year for the past 47 in various cities in Germany, is facing the withdrawal of vital funds, unprecedented interference in its programming, unacceptable conditions of scrutiny for future funding applications and unwarranted damage to its reputation.

Lesbenfrühlingstreffen welcomes all lesbians: women loving women, women who are living as lesbians, woman identified lesbians, late bloomers, Jewish lesbians, Black lesbians and lesbians of colour, lesbians with and without children, disabled lesbians, lesbians with a different cultural and social background, lesbian refugees, lesbians from Eastern Europe and the Global South, intersex lesbians, lesbian detransitioners, and lesbians who are coming out. However, the Board of Lesbenfrühlingstreffen has taken the liberty not to invite explicitly men and women who claim a trans identity. Besides many others, there are a number of events that are concerned about the increasing dominance of the “trans train” within the women’s and lesbian Communities. For this reason Lesbenfrühlingstreffen is facing severe difficulties. To show support please consider buying a ticket here or making a donation through PayPal at [email protected].

As part of their attacks on Lesbenfrühlingstreffen, several groups and individuals have also defamed WDI and mistakenly identified us as a US-based organisation. We are an independent UK-based international organisation supporting the sex-based rights of women and girls all over the world and funded entirely by donation. You can read our FAQs here.

See here our complaint letter (in English) to UN-CSW, which is the Commission on the Status of Women at the UN, and the letter referred to in the complaint (1 August, 2021).

See here our latest statement concerning the proposal (19/26980) of the party Die Linke about reproductive rights (17 March, 2021). You find here the proposal and the first parlamentary debate.

See here our press statement relating to the International Women's Day and our call on the government to include voices of women defending sex based rights in the current consultations on "gender identity" legislation (4 March, 2021).

See here our statement on the motion of the Greens about an LGBTI hate crime bill (3 March, 2021).

See here our answer to the statement by several communal offices of the city of Munich on their assessment of the Declaration on Women's Sex-Based Rights (10 December, 2020).

Here you can read our statement of 13 October, 2020 on the bills of Bündnis 90/Die Grünen to repeal the transsexual law and introduce a self-determination law (19/19755) and the FDP "to strengthen gender self-determination" (19/20048).